Welcome!
Close
Would you like to make this site your homepage? It's fast and easy...
Yes, Please make this my home page!
No Thanks
Don't show this to me again.
Close

Al-Qaeda versus BVC — that is, a private war continues.. 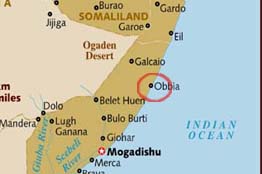 This time the war between Al-Qaeda and BVC Air - Sea Tansport Group (Africa) has been moved from sea to air. A year ago, Somalian pirates hijacked a ship that belonged to BVC, which was then recaptured from pirates with a simultaneous hijack, in revenge, of pirates' motorboat, on which board there was a high-tech navigation-communication equipment and weapons.
On 29rd October this year, the Somalian rebels fired with mortars at a plane that belonged to BVC, shortly after its landing at the airport near Obbia. This time, the rebels also sent video recordings with a fragment of attack to the world. The plane managed to escape from the airport and rebels' fire, however, this fragment was not recorded. An anonymous witness of this event stated that BVC escape was only possible with a usage of weapons. Whose is the next step in this "private" war?

Write to T. Wright at twright@dailymail.itgo.com